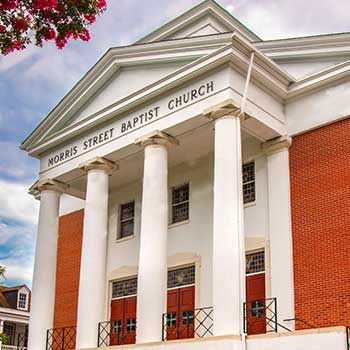 From a two-room building on Morris Street, Morris Street Baptist Church emerged as the "Mother Church among Negro Baptists" in The Low Country of South Carolina on May 9, 1865. On this date, 73 God-fearing Christians of African descent, some of whom had been enslaved, met under the leadership of Father Jacob Legare and organized the church. It became one of the first African-American churches created in South Carolina following the Civil War.

Father Legare led the church until his death in 1885. The Reverend J.L. Dart became the church's second pastor. During his ministry, the membership grew, leading to the organization of Central and Memorial Baptist churches and the expansion of Morris Street Baptist's original building.

The Reverend Randall Kemp was called as the third pastor in 1904. His leadership brought a period of phenomenal growth for the church, both spiritually and physically. A new church was erected in 1909. The membership increased significantly; and at one baptismal service during this period, 93 candidates were baptized.

The Reverend J.C. Dunbar began his 34-year ministry as the fourth pastor in 1922. During his pastorate, many church auxiliaries were formed, including the Board of Trustees, the B.T.U., the Boy and Girl Scout troops, the Brotherhood. The further organization of the Missionary Society and the Sunday School was arranged into departments. The sanctuary was renovated in 1954.

Following the death of Reverend Dunbar, the Reverend J.J. Abney was called as the fifth pastor in 1958. The burning of the renovation mortgage was one of the highlights of his pastorate.

The Reverend Alphonso R. Blake, a Charleston native, was called as the sixth pastor on August 15, 1960, and he began his ministry on January 6, 1961. Dr. Blake led the church through the Civil Rights era.

To God be the glory!The church continued to grow through outreach programs such as Day Care, Adult Education, Blood Bank, APOD (A Piece of Dignity) - Financial Investment Plan, and a Food Bank. The church was also the site of the South Carolina Baptist Congress of Christian Education.

A ten-year plan, developed in 1975, led to the purchase of property that is now valued at more than $1 million. On February 2, 1983, a ribbon-cutting ceremony was held for the 30-unit J.C. Dunbar Apartments at the former "Do As You Choose Alley." The property was purchased in 1981 and renovated at a cost of $606,847.

From 1987 to 1988, Dr. Blake oversaw the installation of stained glass windows and a general refurbishing of the sanctuary. Dr. Blake elected the first three female trustees to the Board. They were Joe Ethel Moore, Evelyn Richards and Eunice Waddy.

The church observed its 125th anniversary in 1990. It marked the publication of the first hard cover souvenir journal of the church. The volume provides a complete history of the church and will serve as a permanent record of the first 125 years of Morris Street Baptist Church.

The church's progress did not stop with this historic milestone. The former parsonage building at 23 Morris Street was renovated for use as the offices for the J.C. Dunbar Apartments, and as additional space for the Sunday School. An elevator was installed and dedicated on May 26, 1991. A Nurses' Unit was formed in July 1991.

In March 1993, a severe windstorm caused major damage to the roof. It forced the congregation to move temporarily to the Fine Arts Center at Burke High School while repairs were made. The building was rededicated in October 1993.

Because of serious deterioration of the lower level of the building, major structural renovations were made in late 1996 and they were completed in March 1997. That same year, a "chair lift" to assist handicapped persons was installed, and other improvements were made to the grounds and the parking areas.

During his tenure, a thirty-five-member Strategic Planning Committee has completed a strategic plan, which the congregation adopted for implementation, for the future of this nearly 154-year-old congregation.

Notable among the ministries created is the church's partnership with the Charleston County School District named "The Social Butterflies". This community outreach to so-called "at-risk" 12-14 year-old girls seeks to increase the participants' sense of self-worth, perspective toward education, and to develop and define short and long term goals. The ultimate purpose is to help them become self-sufficient, motivated adults!

In the Fall 2014, the MSBC completely repainted the exterior and installed closed circuit security surveillance for the interior and exterior. Most recently, the church added the first Part Time Financial Secretary in the history of MSBC. Eight (8) Deacons have been Ordained under his leadership. Also, the first female Chairperson of the Trustees' Ministry was installed in November of 2014.

In April 2017, the MSBC Food Bank Ministry was resurrected after an over (20) year hiatus and has served nearly (3,600) three thousand six hundred persons and/or families since reopening!

Reverend Griffin considered it an honor to follow in Dr. Blake's footsteps, and served until April 8, 2022.

About
History
Mission and Vision
Our Pastor
Contact Us